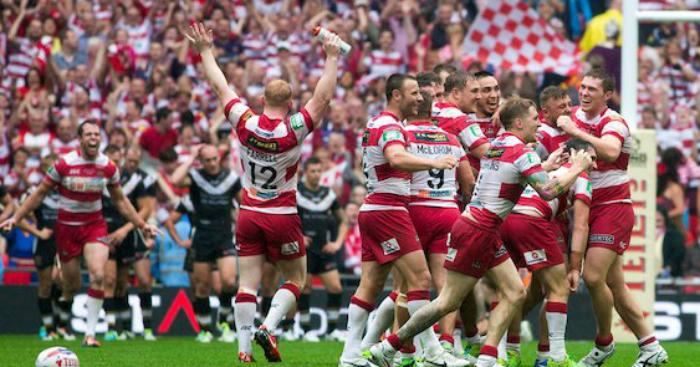 There is a lot of excitement surrounding this year’s Challenge Cup final as Hull take on Wigan Warriors at Wembley Stadium on Saturday afternoon.

Hull had to wait 87 years to taste success at one of the country’s most iconic stadiums, however the black and whites now have the chance to retain the Challenge Cup.

Hull won the competition last year beating Warrington Wolves, however this time around they will face the Wigan Warriors.

On the way to the final Hull have produced some superb performances, starting with an outstanding 62-0 demolition of French side Catalan Dragons. They then defeated Castleford Tigers 32-24, beating the eventual League leaders shield winners in a comfortable display.

Their crowning performance though was beating Leeds in the semi-final by 43-24, securing their date at Wembley once more.

Wigan who have always taken the cup seriously started this year’s run to the final in style by beating Championship side Swinton Lions with ease. They then faced a tough Warrington side in the quarter-finals only just narrowly beating them 27-26 on the day.

After only just getting past Warrington they then faced Salford Red Devils in a tense semi-final game in which the Warriors showed their class. They eventually won the game with ease 27-14 to book their seat at Wembley Stadium.

The team from Yorkshire will be in confident mood as they travel down to London, they have beaten their Lancashire counterparts on both occasions this season.

The first being back in March in an entertaining game, Hull raced into a 22-0 lead, only for Wigan to fight back bravely by scoring four tires. However it wasn’t enough as the black and whites came out the victors on the day.

Hull put in a similar if not better performance back on their own patch at the KCOM stadium, beating Wigan 39-26.

The two sides first met in the Challenge Cup back in 1985, in a thrilling final which was won by Wigan 28-24. They also met in the 2014 final, in a dour game it was Wigan who once again ran out winners on the day, beating Hull 16-0.

Wigan are looking for their 20th Challenge Cup, and at the height of their powers in the 1980s and 90s they won the competition eight times on the trot. This will be their 31st cup final appearance, a record, they have won 17 out of the 24 finals they have played on the Wembley Turf.

Meanwhile Hull’s record is less spectacular, having only won once at Wembley in nine visits, that coming in last year’s Challenge Cup final success.

Wigan fullback Sam Tomkins said about the final: “We’ll be expecting to see the Hull side that played the quarter-final against Castleford. I think that was probably their best performance of the year, they were brilliant that day.”

While Hull scrumhalf Marc Sneyd commented: “Wigan are Wigan, they know how to win a trophy, and they’ve won the Challenge Cup more than anybody. It’s down to us turning up and doing to them what they’ve done to a lot of teams in the past.”