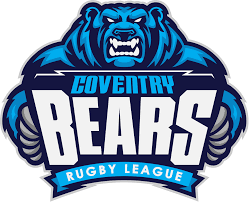 Head coach Tom Tsang said on all his new players: “I am very excited to be able to confirm Ben has agreed to join the Bears for 2018 from the University of Gloucestershire All Golds.

“Ben, who is currently completing a master’s degree in Gloucestershire, has played two full seasons at League One level where he has established himself as a strong attacking halfback with a damaging kicking game.

“As well as his time in League One, Ben was also the starting halfback for the England Universities side that travelled to Australia this summer for the Student RL world cup and so is familiar to a number of our existing squad.

“Andrew is the first of a few new signings we will be announcing in the coming weeks as we look to complete the look of our squad ahead of pre-season starting in late November.

“Andrew played the first four seasons at Oxford RL in the centre and in that time racked up 68 appearances. He has almost a 1 in 3 games try scoring record at this level, so we know he will be a great attacking threat for us.

“He is a good athlete and understands the game well, he will complement the other players we have already secured and I am looking forward to working with him.

“Joel is a quality signing for us, he joins having spent two years away from the sport setting up his own Personal Training business, but has plenty of experience at League One level having played for both Oxford RL and Gloucestershire All Golds.

“He is a front-rower, with a big frame and good work rate. He attended our recent trials and was a clear standout performer. He has a few areas he needs to work on due to his time away from playing, but that’s what pre-season is for and I am confident he will add value to our forward stock.

“Peter, a prop forward, is a relative newcomer to Rugby League having played his first match in his homeland Ireland just three years ago. Since then he has represented his Country in the Student RL world cup in Australia, where he impressed a lot of people, especially us here at the Bears, where we have a strong Irish link.

“He was then invited to our trial date in October where he again showed what he is capable of, he is a very hard working player, very tough and loves the defensive side of the game. He is obviously still very inexperienced and as such he has a few areas he will need to work on and develop, but with the attitude he has shown and the level he is already at, we believe we have a real player on our hands.

“I am excited to see what Dante can achieve with the Bears, we first saw him in action playing in an England Colleges trial match which was played at the Butts Park Arena. Dante, who comes from Wigan but attended the Salford Red Devils academy programme, really stood out. Since then we have stayed in contact and eventually worked with Dante and Coventry University to bring him to the Midlands where he will combine studying for a degree at Coventry University where he is on a sports scholarship, with playing for the Bears.

“As an 18 year old, he is very mature, but naturally he has lots to learn still and we hope to be able to develop him over the 3 years he is in Coventry.”